When permaculture curriculum was first developed there were a couple of areas that just didn’t get enough attention.  One of those areas was mycology and how the regenerative and abundantly productive nature of mushrooms factors into ecosystem and human health.  Well, that is changing as the Radical Mycology has stepped up to offer free resources, pay what you can courses and community oriented strategies for culture change.

Since the initial germination of Radical Mycology in 2006, one of the biggest goals of the project has always been to create stronger connections between amateur mycologists, activists, and grassroots bioremediators working to increase the health and resilience of their communities and environment. Over the years, the Radical Mycology Collective–an anchor point in the larger Radical Mycology movement–has strived to achieve this goal through a variety of means. With the creation and release of free media and educational videos, the group has offered simple and accessible methods for cultivating fungi for food, medicine, and the regeneration of damaged landscapes. By organizing three internationally attended Radical Mycology Convergences, the Collective has worked to build a greater sense of community amongst the many isolated pockets of mushroom cultivators and radical ecologists while simultaneously sharing the often inaccessible skills of working with fungi in a unique format. In the fall of 2014, the group went on a 3-month cross continent tour to share their knowledge and skills with over 40 different community groups and organizations. Along the way, the group discovered a strong desire amongst their collaborators and new friends to understand the fungi and integrate their gifts into the common struggle for finding better ways to live sustainably on the earth.

The setting for Recomposing Life will be Tryon Life Community (TLC) Farm in Portland, OR. TLC is a small farm and community that seeks to provide space for events and organizations that support the advancement of community-based sustainability and social change and the tending of resilient ecosystems. There will be limited camping available at TLC for some participants. Course leaders will attempt to find lodging for the other participants if other options are not available to them.
The cost of this course is donation-based. We suggest $300 for the entire course to cover course workbooks and other logistical costs. However, to best support the growth of a community of radical mycologists we offer this course under the banner of NOTAFLOF (No One’s Turned Away For Lack Of Funds) while still asking that you GAYAABAGS (Give As You Are Able But Always Give Something). This course is a fundraiser for Radical Mycology. Any money left over at the end of the course will be used to support Radical Mycology directly as a volunteer-run project.
As this event can only accommodate a small number of people, we are asking all those that feel called to this course to fill out an application form. From these applications we will choose a range of participants who will represent as demographically and geographically diverse of a group as possible. One’s ability to cover the suggested donation is not a determining factor in our decision making process. We welcome people of all backgrounds and experience levels to apply.

I’ve been kickin’ it here in Portland for the last few days.  I was just recently at the North American Organic Brewers Fest and tonight I’m filming the @ecotrust Sundown Concert series which will be happening each thurs for the next couple of weeks.   If anyone would like to kick it with me and help find rad permaculture or ecocity related projects to check out hit me up via twitter @gaiapunk or at thejulianeffect(at)gmail.com.  Here is just one more reason that #PDX is the king of permaculture cites.

PORTLAND, Ore. – Groundbreaking ceremonies were held Thursday in Portland to mark the start of construction of the first new bridge across the Willamette River in over 40 years.

However, the newest bridge to span Portland’s east and west sides since 1973, when the massive Fremont Bridge was lifted into place above Portland’s northern industrial district, will serve as a link for mass transit, cyclists and pedestrians.

There will be no lanes for cars and trucks on the new span, which will be a 1,720-foot suspension bridge with futuristic styling, wide sidewalks for cyclists and tracks for light rail trains and street cars. TriMet buses will also use the new bridge, which will be fed by Southest Sherman Street on the east side and Southwest Porter Street on the west.

The overall project, incuding 10 rail stations, ramps and other structures, is 7.3 miles in length.

Rail tracks across the Portland-Milwaukie Light Rail Bridge will expand Portland’s widely heralded urban light rail and streetcar system out to a total of 60 miles when it connects Milwaukie and other communities along McLoughlin Boulevard on Portland’s southern border.

“This project will continue our region’s proactive approach to transportation,” said Congressman Blumenauer in a press release Thursday. “It provides thousands of jobs while improving connections for SE Portland and North Clackamas County. I applaud TriMet and our region for getting this project moving and I’m eager to see it get underway.”

“The bridge and the overall project will link east and west, improve and expand transit, and most importantly, create up to 14,000 jobs when we most need them,” said TriMet General Manager Neil McFarlane.

Construction of the new span begins Friday, July 1 and is expected to wrap up in the fall of 2015. The cost of the bridge is about $1.5 billion, paid for with 50 percent federal funding and the rest funded by “state and local partners” according to a press release. It is similar to a recently constructed bridge in Boston.

Gaiapunk is going on the road! 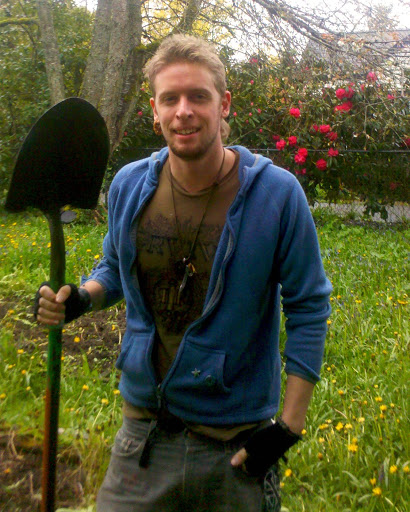 Here is some is exciting news folks,  I @gaiapunk (Evan Schoepke), the editor of punk rock permaculture e-zine may be coming to your town soon.  I’m happy to announce that I just recently accepted a position as the mobile tour lead with the Green Living Project and I will be traveling the country documenting the most exciting sustainability stories and regenerative projects I can find, as well as, doing environment education presentations in schools along the way.  And if this wasn’t exciting enough I will be riding (and living) in the colorful Sol Trekker an incredible retro-fitted RV which you can learn about below.   The Green Living Project is a one of a kind sustainable media production company that truly cares about promoting the best ecological projects in the world.  They have some amazing non-profit partners such as the famed Lost Valley Permaculture Education Center which I was fortunate enough to vist recently for the first time.  I’m currently in the Portland, OR area for the next 3 weeks and will be posting my rough calendar shortly (if you want to meet up just tweet a message to @gaiapunk).  I would love to connect with people on the road or on the web as the tour progresses.   If you know of a exciting project that we should capture on our route we would love to here about it.  I also would like to give a shout out to all my supporters here at PRP e-zine, as well as my friends and family, and I promise I will to continue to provide some of the most interesting content documenting the permaculture movement to be found on the web, thank you all!